Tee times for our Open Competitions can be booked online at  Book Now. Further details can be found on our members pages, Fixture List and Opens .

32 members of The Osprey Closed group visited Bridge of Allan on Friday 5th June for the annual golf outing. The day got off to a good start with Helene’s renown breakfast rolls and the weather was kind on the day after so much rain recently, making the visit much more enjoyable. The group are seen wearing the ‘members’ tie which depicts the colours of the various teams within the group – very smart attire indeed!

Beaconhurst Golf Hub Opening. The Headmistress of Beaconhurst School invited the Captain, Phil Wallom and Junior Convenor, Stewart Cameron to attend the opening of the Beaconhurst Golf Hub on Friday 2nd June by Martin Slumbers the Chief Executive of the Royal and Ancient. See the full article and photos on the Club News section.

Stirling Archives has published a particularly interesting blog on Walter McFarlane’s ‘Hole in One’ Certificate at the 5th Hole, Bridge of Allan Golf Course, 14th June 1928 – you can access the blog here

We would love to see you on the 11th of June! Tee times for our Open Competitions can be booked online at  Book Now. Further details can be found on our members pages, Fixture List and Opens .
Despite some challenges and amendments to the planned coring of the Course greens on Tuesday, some 20 volunteers gave their services today in support of this initiative. On behalf of myself, Scott and the Club’s Management Committee we would wish to extend our appreciation for all their efforts.
At the same time as work was ongoing on the Course, the Ladies Section, led by Annette, commenced the cleaning of the UPVC fascia and windows of the Clubhouse.  In addition, the roughcast / harling  to the front the Clubhouse has also been painted with the gable end to be completed in coming days.  Members should be aware of the work already completed by the Ladies Section in improving the Clubhouse and decking for which I would suggest they all deserve our thanks and appreciation. Read the full details on Greens Updates.

Harold Thompson was one of four members of the Club who died fighting for their country during the Great War of 1914 – 18.

The Club dedicated a competition to his memory ‘’The Harold Thompson Centenary Medal’’, when members were able to read a tribute to him on the ‘touchscreen’ competition entry system.

Simon and Iona Murray, great grandchildren of Harold Thompson, together with Simon’s wife and children, 5 year old twins Archie and Matilda, had travelled from England and Ireland to Bridge of Allan as their personal act of remembrance.

Following a memorial service at St.Saviour’s Church, when Simon provided a moving tribute to the heroism of his great grandfather, the family visited the Club to view the Roll of Honour displayed in the clubhouse. They examined the Pullar Cup, which had been presented to the Club by Harold’s uncle, Edmund Pullar, in 1914 and is still played for today.  In addition they were presented with a commemorative folder containing articles and pictures of Harold Thompson which had been assembled by a Past President of the Club, Stewart Cameron.

Their visit to the club concluded with a walk up to the Millenium Cairn viewpoint at the 3rd tee from where they were able to see the course and enjoy the magnificent views, largely unchanged from the days that Harold Thompson had been a member. 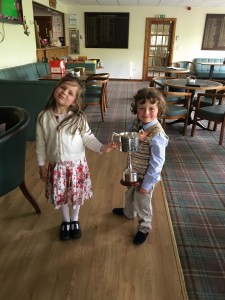 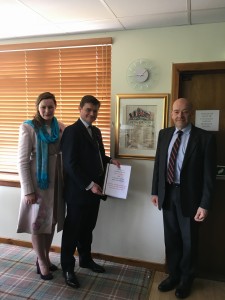 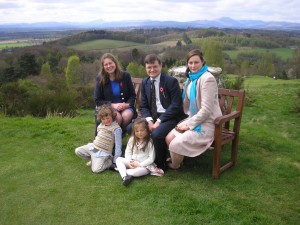 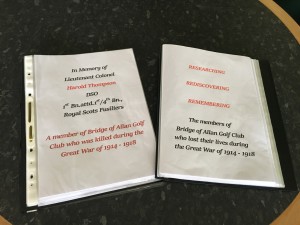 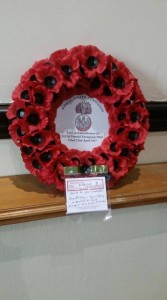 Tee times for our Open Competitions can be booked online at  Book Now. Further details can be found on our members pages, Fixture List and Opens .
Panoramic view from the 3rd tee, taking in Stirling Castle, Ben Lomond and Dunblane.

Cameron Taylor was selected to be the Club’s Junior Captain for 2017 at the recent Annual Junior/Parents meeting.  Lewis Cowie, Andy Jarjour and Andrew Stuart were appointed as Junior Committee members with responsibility for assisting with the organisation of junior competitions, team matches and adherence to the Club’s rules and regulations by all Junior members.